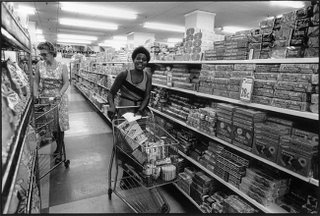 I was born in a town called Salisbury. The town, in Rhodesia – now named Zimbabwe, was named after the Lord Salisbury the Prime Minister. Salisbury was an influential figure on the British side of the Boer war. This was a war fought in South Africa with the British against South Africans.

Salisbury in Wiltshire is a most beautiful place to visit. The Cathedral is stunning. There is so much of the history of England in Salisbury – an original copy of the Magna Carta is housed in the library.

By chance old friends of ours, Paul and Wendy Wright, had just emailed us photographs of a shop scene in Harare, the present name for Salisbury.

Our ten year old Eleven Plus children will find it difficult to look into the future. Who could have thought the changes that have taken place in Zimbabwe? All we can do is try to explain to the children that great changes will take place during their lifetimes. The changes won’t all be about newer flat screen televisions and more powerful mobile phones. The better the education that we can offer the children in our care the better they will be able to cope with changes – be they peaceful or violent.

So if the children are ready for change they won’t be thrown quite so easily if they are faced with an unexpected question in the Eleven Plus examination. 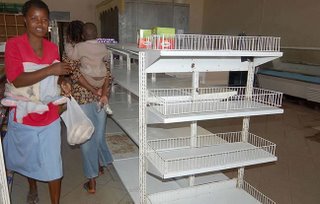 I drove to Salisbury today to teach on a course. The Travel Lodge connection was remarkably difficult to access. Hence this blog was saved until today.
Posted by On-line At Etc at 8:49 pm

I really enjoyed teaching the 3 day 11+ revision course held at New Malden last week. Its'a real treat for a teacher to have such a highly motivated group as my students were.

On the second day after a good session of concentration we had a short break to relax (just before the official break)and one of the girls asked me "We only have 3 more minutes to the break, do I need to carry on?"

"You could change your life in 3 minutes" I replied,"You might just learn one thing which will come up in the exam and tip the scales in your favour". She picked up her pen again and worked willingly till the break.

As they went out I said "Your future is out there somewhere but watch out for the black holes in your path!" There was some talk about black holes only existing in space.

When my son-in-law's father (the other grandad) was 11 in 1939, he was awarded a scholarship to secondary school. The Second World War broke out, he was evacuated twice from London and never went back to school after the war.

That's one example of what I mean about black holes. As parents we can't do more than get our children ready for all eventualities.