Eleven Plus and Languages 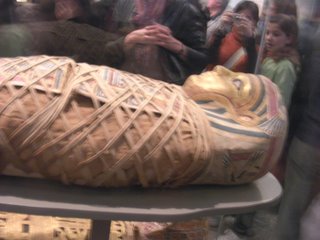 Children learn about the Egyptians at home.

Children also learn about the Egyptians at school.

Some children travel to Egypt and learn all about the Ancient Egyptians through seeing the real pyramids and artefacts.

Other children read about the Egyptians in books.

Some have the opportunity of being able to visit the British Museum.

We went there today. It was a wet and cold day. It was crowded. I have been through the Egypt sections on days when there were many fewer people.

On every exhibit families from all over the world were discussing the Egyptians. I have no idea of how many tongues were spoken. Naturally some parents were reading and translating for their children – but many children seemed to be able to read English. They held animated discussions with their parents in a mixture of their home languages and English. I was struck again and again by the rapt attention and the laughter.

What a tremendous fillip it would offer to language teaching if children writing Eleven Plus examinations had to offer a language. Think of the effort and attention that parents would put into ensuring that their children could read and speak another language.

We have heard that there are fewer children choosing to `do languages’ at school. Think of the impact on the language department of a grammar school if each intake had children reading and writing a second language.
Posted by On-line At Etc at 8:12 pm