An Eleven Plus Tribute 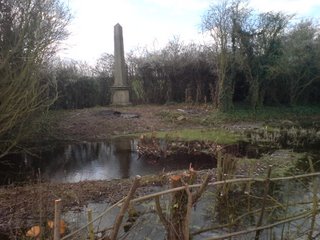 The National Cycle Pathway Route 1 runs beside the canal that flows between Gravesend and Higham in . As the crow flies this is a distance of around six miles. By bicycle, along the cycle route, the journey is possibly nearer to eight miles.

In mid summer hundreds of people cycle and walk along the path. Today I met just one intrepid cyclist. The wind was very cold.

Some volunteers have obviously been working on the route. There was no rubbish lying beside the path. (Thank you to them for their hard work.) Reeds, branches and trees had been cleared in key places.

An obelisk stood proudly in a clearing. I have been down the path many times and have never seen it before - so it was an exciting find.

I was too far away to read any inscriptions. I did wonder whose names were recorded.

Many parents would probably think it very fitting to erect a monument to the person who first thought of the Eleven Plus.

We could then applaud the opportunities that have been offered to so many children.