An Eleven Plus Problem

We visited Howlett’s Zoo on Sunday. A few of the zoo keepers were kind enough to chat to us about their life and work. Some zoo keepers are permanent staff and some are temporary. There was a time when no educational qualifications were needed to work in a zoo – but the new crop of zoo keepers are surely likely to be qualified.

It does seem likely that zoo keepers have to like animals! It is also likely that a zoo keeper has to be patient enough to be able to answer a whole range of questions from the public. The men and women, of all ages that were kind enough to chat to us, all explained that vacancies are limited.

The Zoological Society of London has a training scheme for keepers. Children can enjoy days where they can be zoo keepers for a day. Some bright eleven plus children would love the interaction with the animals and the zoo keepers. 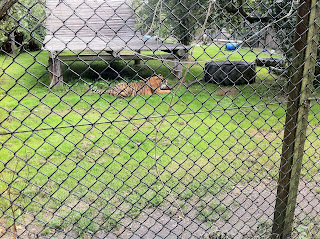 We really enjoyed the tyre being dragged around the enclosure as the `wild beast’ fought for its prey.

The zoo had a scheme of 10% off retail purchases for passport holders.

The net cost was calculated by the terminal. 0.18p was then taken off – representing the 10% off retail purchases. The 10% was taken off the ice cream – and not the toys.

Your eleven plus question:

Should we have queried the final bill?

How much discount should have been offered?