Rocketing Through the Eleven Plus

There must be many of us trying to find ways of exciting the minds of our eleven plus children. One of the exercises over the weekend had the word `propulsion’. The great majority of eleven plus children will have little difficulty in being able to define the word. One boy, Kevin, had problems in finding reasonable synonyms. It is very easy for a teacher or a parent to give answers and move on – after all there are many different exercises and examples to work through. But what happens if you don’t want the child to be spoon-fed?

Harry, who was working with Kevin, went through the process of building a hydrogen powered rocket that would take Kevin from his lesson to the nearest MacDonald. Naturally there was a discussion around how hydrogen is produced. We can then see the hydrogen carried off in a cart to the rocket. Kevin then took his precious hydrogen and climbed into the rocket – ready to be launched. 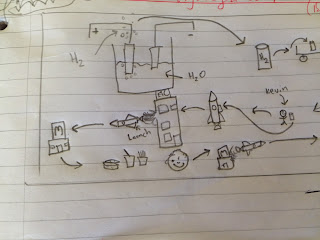 It is clear to see what Kevin chose! The smile shows that he was very happy. He was then launched back to his lesson, replete and happy. Mission accomplished!

Some purists would argue that this whole exercise was a complete waste of time. Kevin should have been given a Thesaurus and told to look up the word `propulsion’.  (“It was not like that in my day!”)

Perhaps he should have been given the answer and then advised to complete the next few questions.

Kevin, however, was happy with his journey and his Big Mac.