I watched, with interest, different sets of children around the age of eleven today. Some of the children were obviously at a good state or even possibly a private school while a different group appeared to be fending for themselves.

It is likely that both groups of children were carrying the same amount of money. The one group was looking to buy and the other trying very hard to sell. The technique of both sets was remarkably similar. There was no petulance, no tears, and no histrionics – just persistence.

Group A were attempting to buy matching garb. The tops, pants and shoes had to match. This was the cult of the sisterhood in full sway. The fathers, looked at with reproachful eyes, were no match. The girls reached their objectives in a remarkably short time.

We never saw the parents of the other group. They looked clean and well dressed. They were carrying very little and were determined to sell their goods. The children were selling little wooden snakes, small inlaid boxes and sweetmeats. There was nothing complicated in the price negotiations because the price they asked for their good was so small. They also achieved their objective in a remarkably short time. Their technique was to take refusal in good heart and then circle round and reappear some ten minutes later. They had already made contact, established a form of relationship, picked their mark and were determined on a sale. There were the same children that Charles Dickens had described so well many years ago.

Bothe sets of children had developed a form of awareness of a situation – and had the tools to be able to bring a situation to a conclusion. The one set would never do an Eleven Plus examination – and would grow up to because self sufficient adults. The other group of children will go on to pass examinations and sail through university . 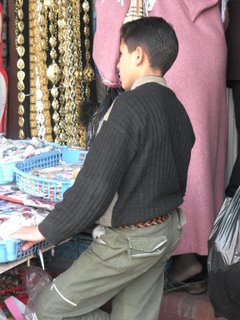 In years to come their lives may come together – some selling and some buying. Both sets capable of exceeding expectations.
Posted by On-line At Etc at 5:58 pm