It Has Only Taken 50 Years!

On the news today the government announced that phonics would be the primary approach to teaching reading. This will be great news for some children with reading problems when they are approaching the 11+ examinations.

So many verbal reasoning exercises depend on the ability to look at words closely and see differences between words and parts of words.

A few weeks ago, in a second hand bookshop, I found a first edition copy by `Gagg’ on the teaching of reading. The book dates back over 50 years. Gagg explained the difference between learning to read by whole word methods and learning by phonics. This is how Mr Gagg, fifty years ago, explained the two approaches: 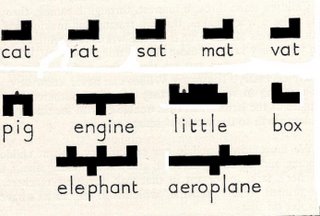 In Etc we have just had our twenty nine thousandth pupil. We have seen some children who have been taught `look and say’ and others phonics. Some children have even been taught by a combination of methods!

It would be make an interesting study to see which group of readers could cope with finding hidden words. (Find a four letter word that is hidden between two words that are next to each other.)

I wish I could introduce the person or persons in the government who made the decision about phonics to Mr Gagg so they could benefit from his insight and early research.
Posted by On-line At Etc at 8:36 am